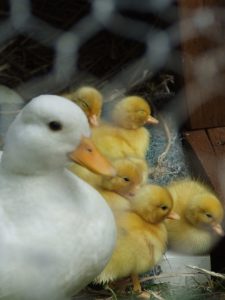 No surer sign of summer than our new call ducks producing their first ducklings.

These are “Call Ducks” and are quite cute, some call them the bath toy duck. They are small, cute and very energetic ducks and here at Garden Cottage as well as the new arrivals, we have 4 Adults, 3 females and 1 male. This is the first hatch of ducklings for our adult ducks.

When sitting on the eggs the Call duck is very protective of their clutch, hiding well in the undergrowth or under objects. So dedicated to their role, that even when a garden strimmer passes within inches of the nesting duck, she doesn’t move an inch.

This is the second clutch of eggs this year, but the first to hatch. The ducklings are kept in a protective run with their mother to prevent predators attacking them during their first days. Predators such as Crows, Cats, Sparrow Hawks, have been noticed to increase after the ducklings arrived on the scene.

The run is secure and has a shelter for mother and ducklings and a small pan of water, enough to allow the ducklings to be introduced to water but not enough for them to drown in should they become water logged. Human contact during the hatching stage of their development is kept to a minimum as the Ducklings have a strong ability to readily imprint  on the first creature they see that is bigger than them because they know they are the same species as the creature they see upon hatching, this ability makes them follow other species such as dogs or humans.