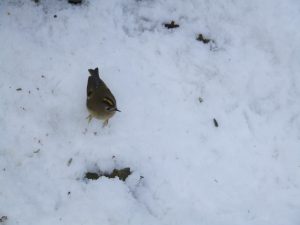 When asked in July to teach a weekend introduction to permaculture on Skye in November my first question was ‘What if it snows?’ Especially as creating a Community Garden was behind the project. ‘What- snow in Skye in November- never!’ Hmmm. Well it is funded by the Climate Change Fund! The night before a goldcrest hops past the lounge window in the snow. The picture is actually from last winter… but Britain’s smallest bird is incredible tame and totally not frightened of people. Amazing omen.

So left Coldstream 8.30am on a very snowy Friday morning. Car laden with books, fruit, shovels and cold weather gear. First two hundred yards down the lane very dodgy. Next thirty miles to Carfraemill on icy road, just dodgy. Then over the Soutra and- no snow!

It’s interesting how no-one in Edinburgh believes you can be snowed in if they’re not.

Edinburgh bypass, M9 to Stirling, the odd glimpse of snow on mountains way north. Stop for cup of tea, and then Nancy drives us up through Callandar, Crianlarich, stop at the (obligatory) Green Welly Shop in Tyndrum to recycle the tea. Rannoch Moor- ah at last lots of snow capped peaks. Brilliant sunshine and great winter colours in the clear air. Down Glencoe to Ballachullish and stop for a plate of warming stew.

On up Loch Linnhe to Fort William. Go round the wrong roundabout three times (I’m sure I’ve done that before) – yes I’m driving again, and decide to go via Glengarry for the views. Whoops. Meet the snow and ice at Loch Cluanie. Oh joy. A forty mile bobsleigh ride by Citroen down Glen Shiel to Kyle of Lochalsh on very dodgy ice and snow at not much over twenty miles an hour. Pass gritter driver having his sandwiches and tea in a lay-by as we go slithering past.

Grand to see Eileann Donan in the snow.

Arrive on Skye to no snow whatsoever- until half way from Broadford to Armadale where it gradually increases. Stay at the Ardvasar Hotel. Turn up for the first evening (which has been called off because of the weather) in case anyone else does. After half an hour failing to make the projector work we retreat to the Ardvasar Hotel to sample bar meals and beer. A jolly evening is had by all.

Then two days of course at the amazing Sabhal Mor Ostaig- the Gaelic College on Sleat. Us fae the Borders, Janice from Fife, whose husband Ian goes off walking, Fiona from Glasgow, Tommy from Knoydart, and Sandra, Lynn, and Eildih from Sleat. The six other people from Sleat can’t get there because of the weather!

I think it goes OK. Angus Robertson from the Sleat Community Trust joins us for a while on Saturday morning and for all of Sunday. It’s great to hear from him about the work of the trust- lots of community and sustainability stuff. The trust is obviously a fantastic resource. Windmills and forests on the way.

We get to walk in the proposed (snow covered) community garden and Angus is delighted to be informed that there is a magnificent lime tree (Tilia europaeus) by the entrance which must be at least two hundred years old.

Monday morning we amend plans and take the ferry to Mallaig and return via Fort William without the Glen Shiel skating rink. Rannoch Moor is now wearing a bonny white coat. Highland Perthshire is pretty wintery and the M9 is sporting some fine ice. Fast driving trucks are pretty terrifying to lowly car drivers.

We make Coldstream High Street in seven hours from Mallaig (rarely going over 50mph). It then takes an hour and a half to go the last two hundred yards, eventually being towed in by neighbours caterpillar tracked digger, which also eventually gets stuck. But we are home. Safe. And now it really snows.

We ain’t going anywhere fast unless there’s a thaw, now. And I’m dead keen to see what happens to the Clean Sleat project (great name!). Thanks for having us!

Anyone wishing to donate to the reforestation project can do so at: www.tormore.org – It’s worth a look anyway.

As I post this blog we’re running Danny MacAskill’s great video- Return to Skye- even more hairy than our journey, but great fun.