Everyone who discovers permaculture adds something to it. That’s because we all have different life experiences and different perspectives. 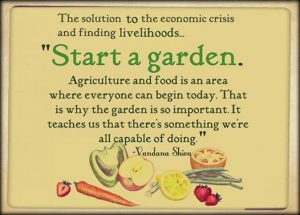 Many people find they first make their connection through a desire to grow their own food, and because they learn that it is something they can achieve joyfully and with great satisfaction. Along the way they harvest increasing insights into a different way of understanding the world from the ones they primarily encountered going through conventional education systems.

Over time those very systems start to learn from this different perspective and change themselves, so that ideas which were ‘radical’ or ‘extreme’ a quarter of a century ago, now seem to have much more credence in ‘mainstream’ circles. The words in inverted commas are there because these kinds of categorisation are relative, not absolute. They reflect the positions taken by individuals or groups, not the totality of what is going on.

As someone whose major role in life has been to be a catalyst for change (hopefully usually for the better, but that’s just my view!) I have long been struck by two quotations:

‘All truth passes through three stages. First, it is ridiculed. Second, it is violently opposed. Third, it is accepted as being self-evident’ Arthur Schopenhauer

‘A prophet is not recognised in his own land’ (which has many translations but is ultimately derived from the Bible, Luke 4:24)

I feel that what I have added to permaculture is practical demonstration of its principles, some writing, some teaching, and two levels of insight, which I would call poetry and politics. Poetry: because the ability to communicate the discipline in a poetic way fires up peoples’ imagination, and politics: because understanding the imperatives for practising permaculture thinking motivates people to get on with it.

I wonder what your contribution has been?