Garden Cottage is home to a Forest Garden started from scratch thirty one  years ago, and is now sufficiently mature to show the intention of its original design. The Forest Garden is sited in part of the old walled garden of the Lees Stables, Coldstream. 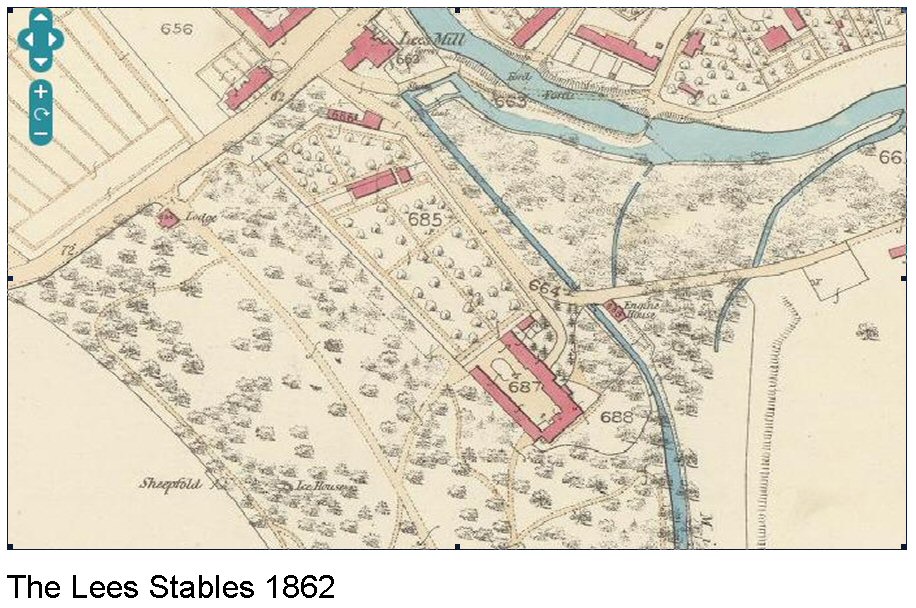 The image below, an RAF Reconnaissance photograph taken on 22nd February 1952,  shows a time when the walled garden was still complete (and maintained!)

This fifth of an acre plot (800 square metres or .08 of an hectare) which now comprises the forest garden, has an extensive range of perennial fruit, nuts, salads and vegetables, as well as plots for annual produce. A cohort of call ducks are on patrol duty for slug and slater control, and the garden is designed as a wildlife habitat for natural balance in predator management. External elements are minimised and significant self-fertility has been developed. The garden has been organic since its inception, and was largely fallow for some years prior to that. 2013 saw over one metric tonne of edible produce recorded. By 2015 this had risen to 1 and a quarter tonnes. Obviously some seasons are better than others but the overall trend is upwards. The garden also produces firewood, hundreds of plants and trees a year for the nursery, a haven for wildlife, and a general sense of well-being. For anyone interested in practical applications of permaculture principles it’s an inspiring visit. Graham and Nancy are on hand to guide visitors.

THE STORY OF OUR TIME AT GARDEN COTTAGE

In 1991, our family of 4 moved into the Garden Cottage, so named because it sits within the old walled garden of a large estate. Our house was built as a retirement home for the ghillie of the estate, in the late 1940’s, when the necessity for the kitchen garden had dwindled rather. Ghillie in the Gaelic means servant but in general usage the English translation would be gamekeeper, which on this estate meant looking after the fishing on the River Tweed. When we bought it, the property included an impressive 1/5 acre of weeds, with a couple of apple trees chucked in for good measure.

We enthusiastically began building our forest garden, including planting generous quantities of fruit trees and bushes, soft and hardwoods, ground-covering and edible plants.

This recently rediscovered photograph, above, is from 1995. You can see Muscovy ducks on the far right in a run and a chicken tractor and beehives on the back left.  The trees in the garden are still quite young.  The house has not yet been extended, but recycled timber and stone gathered for the job can be seen in front of the house.

Here you can see some of our early experiments – as with any project you can expect successes and failures; although we like to think we’ve had more of the former! A framework of ‘climax trees’ (fruit and nuts and some sacrificial timber crops for fuel) has been planted and is interspersed with understorey plants favouring food crops.

Over the years we have, for instance, succeeded in growing several vegetable and fruit varieties ‘too far north’. Quince, plums, cherries, apples, pears, apricots, pumpkins – all have flourished in our little patch of paradise, when other people said they couldn’t! We have had great success with our nut trees – prolific hazels, but walnuts and chestnuts only just coming to fruition. We are perennially over-run with strawberries, gooseberries, raspberries, red, white and blackcurrants, blackberries and a whole host of hybrid berries. A flurry of pie, jam and chutney making usually follows.

We have pioneered wild salads locally and our edible flower salads are legendary. At the same latitude as Moscow and Alaska you can eat salad out of the garden pretty much the whole year round except when it snows. We grow our own firewood and timber for garden constructions.

We have over the years had many welcome visitors, either on teaching and training, or open days (we still run these in the summer, or for invited audiences, so email us if you would like to know when the next one is!).  We now keep a visitors book and invite comments back CHECK HERE.

Our most frequent visitors are the huge variety of birds, bugs and small animals who have found a happy home here. For many years we kept chickens, and have also housed at various times: guinea pigs, rabbits, bees, Muscovy and Call ducks, and even two pigs. Currently our invited guests are some goldfish and a family of Call ducks, who have in the past successfully raised ducklings.

We also happily house a huge variety of ‘uninvited’ guests – birds including most of the usual suspects you could spot in a garden, topped off with delights such as woodpeckers, treecreepers, goldfinches, nuthatches, flycatchers, and goldcrests. Two years ago we had fieldfares from Scandinavia who survived the snow off our surplus apples. Bugs of all kinds from the inherent scotch midges (non-biting) , the delightful lacewings and damselflies, to bumblebees as big as your top thumb joint. Hedgehogs, and other small snuffly creatures of the night. We discourage pheasants, rats, pigeons and neighbourhood cats and dogs, purely because their effect on the ecosystem can be disastrous if left to roam free!  But some of them become food also….

Our garden, at times, has been a playground, campsite, concert hall, and fine dining establishment (of course with plenty of home-grown produce), ice-rink, pig’s palace, and bird sanctuary. It has aided the local community centre in getting rid of 30 years’ worth of pigeon droppings (lovely mulch, thanks). It has provided hundreds of alpine strawberry plants to the people of Berwickshire, as well as saplings, soft fruit bushes, seeds and fruit.

It has now been thirty one years since we planted our first foot on this green, green grass of home. It now tells us the seasons by how much of the back wall you can see from the kitchen window!

Every day it brings us new joy, new experiences, and new fruitfulness.
Come and join us soon at one of our Open Days, and sample our little patch of Scottish heaven. To find out more about the open days, click here.

To learn about permaculture and its sustainable design principles, pick up one of Graham’s books.

Garden Cottage is standing proof of the success of a permaculture forest garden, and we hope to enjoy another 20 years in it.